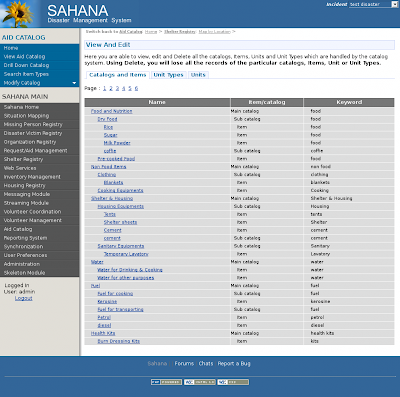 Sahana is an open source disaster management system which is deployed to manage number of disaster situations all over the world.

Initially it was developed to manage the situation occurred in the Indian Ocean tsunami disaster which was occurred in the 26th of December in 2009. Lanka software foundations did the initial development of the Sahana phase-1 with the help of many organizations and the volunteers from various parts of the world. At that time there were no other free software which can support to handle all the situations as handling victims, managing camps, manging the volunteers, manging the NGOs like wise. So this was a better solution for all of this issues.

Initially Sahana contained 7 modules to help the management of the disaster. Those are

But now it has more than 20 modules and day by day it is increasing its scope to be more reliable and useful for the society.

You can visit here and get an overview about the project.

This was successfully deployed in the following situations occurred in the past years .

This is an web base system and the initial developments were done in Apache, MySQL, and PHP/Perl. But now it is redeveloped using python thechnology and it was callled as SahanaPy.

Now the Sahana software Foundation was initiated to take care of the Sahana project and it will be a great step for the future of Sahana.

The source code can be downloaded from here using CVS

and the it can be run using the wamp/lamp server. Here are some tips to run the source code.

When it initially set up, it automatically creates a data base and the accordance tables in the server so now it is ready to give it's services.

So try it and join to the Sahana community to help the people when the really needs you.

Posted by Thilanka Kaushalya at 12:51 AM